Last Wednesday WALKSacramento staff, members, and supporters were treated to a fantastic presentation, “Bicycling in Sacramento: What can we learn from Europe?” given by WALKSacramento volunteer Sarah Underwood, MPH. Sarah’s presentation highlighted findings from her research of factors that shape attitudes toward bicycling. 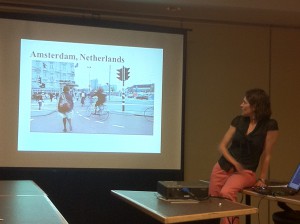 Sarah interviewed Davis residents to collect information on how their perception of bicycling has changed throughout their lives. Many interviewees reported bicycling was fun as a child, but that it fell “off the radar” as a teen, and oftentimes became associated with a negative image. As teens are developing their identities, turning sixteen and getting a driver’s license and a car are rites of passage, which leaves the bike in the realm of childhood toy or transportation for the unlucky or uncool. This isn’t the case in Europe, and Sarah traveled to England, Spain, and the Netherlands to discover why not.

Sarah’s first stop was England, where the bicycle has similar mode share rates as in America (1.6% in England, 1% in America). Eighteen towns throughout England are designated Cycling Demonstration Towns. These towns receive £5 (approximately $8.22) per resident to be spent on infrastructure (80%) and behavior change (20%). Between 2005 and 2008, the average increase of bicycling in the first six demonstration towns was 27%. In one of these towns, Darlington, a project called Beauty and the Bike works to make biking attractive to teenage girls by advocating for better infrastructure and promoting the use of lovely Dutch bikes.

The next stop was Seville, Spain. Sarah used to live in Seville and was stunned on her return to see the improvements to cycling. The bike mode share increased from 0.2% to 6.6% in less than six years, due to construction of dedicated cycling routes, a bike sharing system, car-free Sundays, providing free bikes to bus passengers and university students and staff, and fostering a “bike economy.” How’d they do it? With strong political support, even when it wasn’t popular. Sarah wasn’t just in Seville to visit old stomping grounds though. Her visit coincided with Velo-City, an international conference for bicycling planning, at which she presented the results of her research in Davis. At Velo-City Sarah learned that unlike in America and England, there is no negative image for teens bicycling in most of Europe because teens can’t drive until age 18 and getting a license is very expensive. By age 18 teens have more fully developed their identities and are used to using bicycles as transportation.

Finally, Sarah visited Amsterdam, Netherlands where bikes have a 40% mode share in the urban core. Everyone can ride in the Netherlands because they have great infrastructure including dedicated cycling paths, bike signals, and ample bike parking. And what about the bike’s image? In the Netherlands the bike is not a status symbol of the elite or the poor. It is a symbol of Dutch identity and promotes the Dutch virtues of independence, self-reliance, and self-control.

Sarah concluded her presentation by opening a discussion on bicycling in Sacramento. Can we do it? How can we use this information to increase bicycling in Sacramento? We have flat topography, a mild climate, and a bourgeoning bike culture. But is the bike a status symbol, or a neutral form of transportation? Does it reflect our region’s values? Do we have the political support for infrastructure and behavior change?

We don’t have the answers. This is WALKSacramento, after all.