The following is a wonderful discussion on roundabouts that took place on WALKSacramento’s e-mail discussion list in April 2011, preserved here for reference and review by others:

– What exactly is a roundabout? Go here to find out!!

I found the following roundabout in the oddest place (I thought) on a rural round north of Fairfield CA: 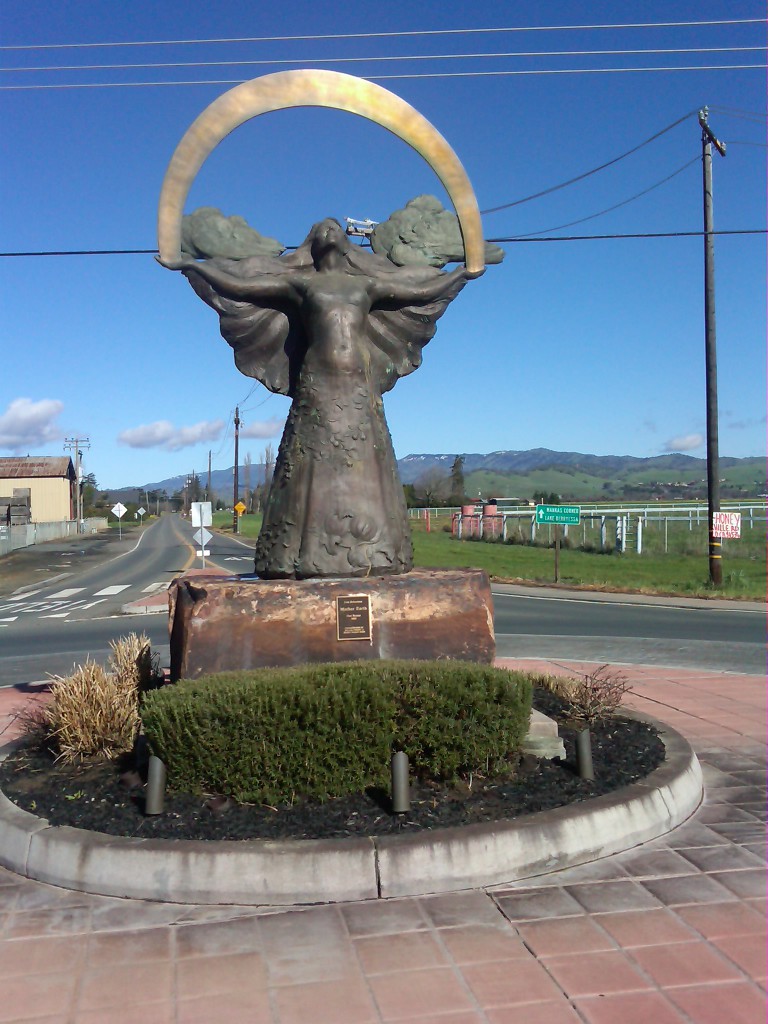 What the heck is this doing here, I thought?  There’s a packing house on one side of the road, fields on two others and an apartment complex on the last.  Odd place for what to me has always been an urban feature.  Last place I thought to see Mother Earth (that’s her, according to an inscription) calming traffic.

I got the back story from a local.  The road (I forget the name, I took this photo in February) runs north of Hwy 80.  People were using it as high speed alternative when Hwy 80 was jammed.  Stop signs at this intersection were laughed at.  So the locals decided to put in something that had to slow down traffic, would be hard to ignore and would look cool on top of all that.  And there she is.

You find inspiration in the most surprising places.

Nice!  Looks like it’s at the intersection of Rockville Road and Abernathy Road.  (Quick search on Google.)  While in the U.S. we’re seeing many urban roundabouts, in France you see a lot more in rural areas than in urban areas.  The reason, I suspect, is that in dense urban places there isn’t enough room to fit them in; not a problem in rural areas where they can easily replace a signal or stop-controlled intersection.

It is unfortunate that roundabouts are being promoted as providing increase safety for pedestrians while providing greater ease for motorists.

I would like pedestrian advocates to understand that roundabouts are a hazard to people with little or no vision.  All auditory cues used by blind pedestrians are lost at roundabout locations.

I would encourage you to try to make a crossing without using your vision and you will find you have no sense as to where moving traffic is coming from as well as finding motorists unwilling to yield the right of way to you.

Thank you for your consideration to the safety of pedestrians with visual impairments.

– Go here to find out how roundabouts can accommodate the visually impaired.

I go downtown quite often for meeting. Being the cheap person I am I park at the park at C Street and Sixteenth Street, free parking. As I walk to WalkSac or the BOS meetings I go through an intersection that has a roundabout. I forget  the location of this intersection. I’m going downtown tomorrow I could email the location and perhaps you could visit it sometime.  Anyway it is not easy crossing this intersection. Cars go fast , they don’t slow down and they make turns without signaling. Sometime there are tall plants in the roundabout that make it hard to see cars coming and I know they can’t see me. I take more caution when crossing as a pedestrian. I don’t drive downtown much but when I come to a roundabout I slow down because it is hard for me to see pedestrians.

Randy, I believe what you are referring to is not a roundabout, but a mini-circle with arguably some design flaws (views obstructed by landscaping, stop controlled vs yield control legs, angle of deflection not enough to slow speeds). The mini-circle fits in a smaller space than a roundabout and still reduces the conflict points for vehicles, but they aren’t necessarily as pedestrian friendly. At a roundabout all legs are yield controlled, and properly designed roundabouts include sufficient deflection to ensure low speeds, and key for the pedestrian are splitter islands at the approaches that slow vehicles and allow pedestrians to cross one direction of travel at a time.

– Go here to see the difference between a Roundabout and a Traffic Circle.

Thanks to all of you for the discussion on roundabouts. I always learn something from WalkSacramento, keep up the good work.

Do you think the residents asked for these mini-circles to slow down traffic?

I know the residents maintain the plant life but I’m don’t know who plants these areas. I know, as I’m sure you all do, the plants grow very high at times. Enough so it is difficult to see pedestrians.

I was downtown yesterday and I think at E and 13th there is a mini-circle.

Three cars were going east and they all made a U turn and headed west. I looked at the sign and I don’t think a U turn was an option. These mini-circles work because I pay more attention when walking and driving.

With regard to the genesis of the mini-circles, my memory may be a bit fuzzy, so others are welcome to clarify, but (at least some of) the circles, along with the various half-street closures and the little refuge islands and other concrete obstacles that dot the streets in mid-town were part of a “mid-town traffic calming project” that the city initiated in the mid to late 1990’s. As much as I ever understood it, the idea was to try and get as much of the cut-through traffic as possible off the residential streets and force it over to the J and L St corridors. Essentially they did that by creating an obstacle course/maze out of the neighborhood to make it less appealing to commuters.

I recall hearing at the time that there was some outreach done with local residents but I don’t know how extensive it was. I was working in mid-town at the time and commuting (not by bike) and recall that there was very little information provided to the general public before these little concrete obstacles started popping up everywhere.  I wasn’t involved with SABA at the time so I’m not sure what, if any, input they had. I believe that this predated WALKSacramento.

The roundabout at West River Dr and Orchard that Ted mentions serves two nearby schools and does a great job handling all the pedestrians, bicycles, parent drivers, and large school buses that come with it. 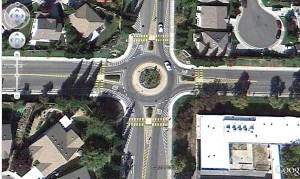 Two other roundabouts to check out in Sacramento are at Heritage and Northborough (N Natomas) and Windbridge and Rush River (Pocket). 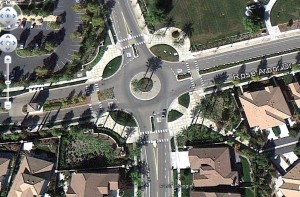 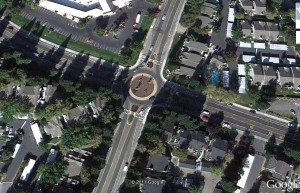 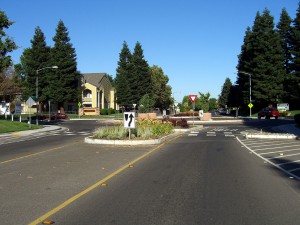 Scott, Thanks for the clarification. I was going to jump in with a similar comment but you beat me to it. The traffic furniture that the city installed in mid-town back a decade or more ago are not roundabouts. They are poorly designed mini-circles that create as many problems as they solve. But there are at least two roundabouts in the city that I’m aware of that are reasonably well designed.  Both of the ones I know of are in South Natomas, at San Juan Rd and Azevedo Dr. and on West River Drive at Orchard Ln.  (folks can Google Map them to take a look). I imagine there may be others I’m not aware of.

In any case, the purpose of roundabouts is to force traffic to slow, which gives motorists at least a chance to see pedestrians. Properly designed, they also allow pedestrians to focus on traffic only from one direction at a time.

Now Gene does make a good point regarding potential hazards for visually impaired pedestrians. One of the weaknesses, especially for the visually impaired (and some would argue also for children) is that rondabouts don’t require people to come to a complete stop.  But one of the places that they tend to be useful is in locations where other methods of getting people to actually stop are ineffective.  For example, sometimes on higher speed roadways, particularly at intersections with minor streets, stop signs are an ineffective method of traffic control because, either indadvertently or intentionally, a significant percentage of motorists simply blow through them. That, of course, creates a hazard for pedestrians, whether visually impaired or not, (as well as other motorists) because there is an expectation that the vehicle is going to stop and instead, it may barely slow down. A properly designed roundabout at least compels the vehicle to slow, which increases the opportunity for the driver to see and react to pedestrians, bikes and other vehicles. Traffic signals, of course, may be more effective than stop signs in these situations but they are expensive and, when used too frequently, can also desensitize motorists .

Factors such as volume and type of ped traffic (i.e. children, elderly, disabled) need to be evaluated to decide what type of treatment (or combination of treatments) may be most effective and appropriate at a particular location.  Roundabouts certainly aren’t a panacea. But properly designed, they are a useful tool in some situations. 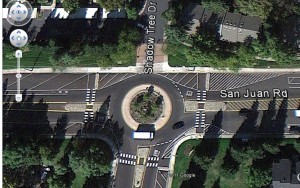 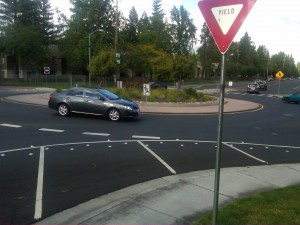 You’re way quicker on the draw than me. Thanks for your thoughtful responses.

One other thing I might mention is that people also confuse roundabouts and rotaries, which people often incorrectly reference as scary roundabout examples (like in Paris, the Arc de Triumph is a rotary). The modern roundabout has distinct geometrical features that force drivers to slow down. I was also informed that they always have “tails” (often including a median refuge for peds).

I do not know the status of guidance for visually impaired pedestrians at roundabouts, but I have long thought that there should be some sort of specialized tactile device or system that alerts the visually impaired pedestrian that the crossing is a roundabout. I also wonder if rectangular rapid flashing beacons are allowed for use nationwide that they could be an effective traffic operation device to work in tandem with a well-designed single-lane roundabout. I honestly believe that if measures such as this are taken at roundabouts, then they are actually *safer* for the visually impaired than the preponderance of signalized intersections. I won’t go as far to say all because banning right turns on red and scramble signals I think can be immensely beneficial. But even in those situations you still have safety issues for the visually impaired.

I want to state that this is also a huge concern of mine, because in so many ways roundabouts are superior  to other types of controlled intersections and I would love to see more used in the US. We have a serious commitment to the needs of people with disabilities in this country, more so than almost all other countries, and I’d love to see that continue too. I hope we can find a way to make roundabouts work for all users.